Mykonos is well known for its stunning landscape, with beautiful golden beaches, windmills and its traditional Cycladic architecture. It comes as no surprise then that the island has provided the perfect backdrop for many movie sets. If you’re interested in finding out more, then we’ve put together a list of some of the most famous movies filmed in Mykonos. So, if you’re a movie fan, then you can come to Mykonos and even visit the places where scenes were filmed!

One of the most famous movies filmed in Mykonos is the romantic comedy from 1989, Shirley Valentine. Oscar-nominated actress Pauline Collins plays Shirley, a Liverpudlian housewife who goes on an unexpected journey of self-discovery and rekindles her love for life. While some scenes were filmed in the UK, the most famous ones are those set in beautiful Mykonos.

While formally named Agios Ioannis Beach, it is now commonly known as the ‘Shirley Valentine beach’. This is where the most poignant scene of the movie is set: Shirley sitting alone on the beach and addressing the audience with a reflection on life’s realities.

Also located on Agios Ioannis Beach is the beach taverna known as “Costas’ restaurant” from the movie, which has now been transformed into Hippie Fish, a trendy restaurant and sushi bar. This was the location where the romance between Shirley Valentine and Costas was born.

There is also a scene filmed in the Chora (Mykonos Town), which features the original building of the TownHouse Mykonos. So, when staying at our luxury boutique hotel, you can feel as though you are right in the heart of where Shirley Valentine was filmed!

The Greek Tycoon, an American drama movie starring Anthony Quinn and Jacqueline Bisset, was filmed on the island in 1978. The storyline focuses on the love story of Greek shipping magnate Theo Tomasis and the widow of the assassinated President of the United States, Liz Cassidy. While it was not received with great acclaim from critics, it is well known for its stunning setting in Mykonos.

This neighbourhood is one of the most romantic parts of Mykonos, with charming coloured houses that sit precariously on the edge of the sea. It made the perfect backdrop for romantic scenes in the movie. This area is well worth visiting when in Mykonos, even if you aren’t a movie fan!

Bourne Identity is an American action thriller filmed in 2002 and was the first instalment in the Jason Bourne series. It was filmed in locations around Europe, with its dramatic final scenes set on the island of Mykonos. Matt Damon stars as Jason Bourne, a man suffering from memory loss and trying to find his true identity amongst a conspiracy with the Central Intelligence Agency (CIA).

In the final scenes, Bourne tracks down the leading lady Marie, played by Franka Potente, on the island of Mykonos. He finds her in the picturesque area of Little Venice, where she is running a scooter rental business at Sea Satin Market, beneath the island’s iconic windmills.

The Kings of Mykonos

The Kings of Mykonos is an Australian comedy which tells the story of Steve, who becomes rich overnight when he inherits a valuable stretch of beach from an uncle he has never met. But when trying to claim his new property, he runs into all sorts of problems! 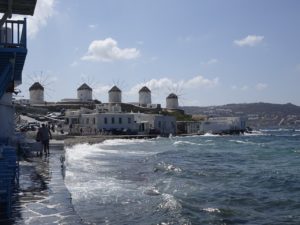 While the movie was filmed in several iconic locations around the island, the most famous scene is the Greek dance performance, which took place in Little Venice.

If you want to experience these famous locations and the idyllic backdrop to these movies, then plan your visit to Mykonos this summer. Once an 18th-century aristocratic manor house, The TownHouse Mykonos has been lovingly renovated to play host to a luxury boutique hotel. Located in the heart of Mykonos Town, The TownHouse offers 19 luxury-appointed rooms and suites with breathtaking views of Mykonos Town.

Contact us with any questions or requests you have about the hotel or Mykonos and we will be pleased to assist you.