5 Cultural and Historical sites to visit in Mykonos

To most visitors, Mykonos must seem like little more than a party island. Although it’s true that it is the ultimate destination for partygoers, you can’t forget the island’s varied and important historical monuments and heritage sites. If you’re looking to experience a different side to the island and learn all about Mykonos history, then here are 5 cultural and historical sites you must visit. 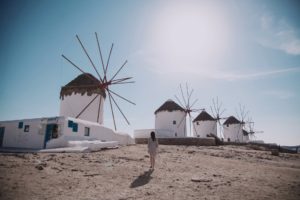 One of Mykonos’ trademarks is its windmills, which can be seen pretty much from every point of Mykonos Town. The famous Kato Mili, in Chora, is a row of four windmills standing majestically on a hill overlooking the sea.

Built by the Venetians in the 16th century, the three-story windmills are capped with wood and straw. They were primarily used to mill wheat, but their use gradually declined over the ages until they stopped operating in the mid-20th century. 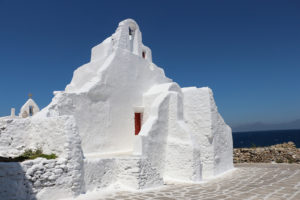 Among the most photographed sites on Mykonos is the church of Panagia Paraportiani, located in the Kastro neighbourhood. The church itself consists of five smaller churches, placed either on top or next to each other. At the centre of this complex is the church of Agios (Greek: Saint) Efstathios, surrounded by the churches of Saints Anargyros, Sozon and Anastasia.

The dome-shaped church of Virgin Mary lies on top of the other four. Aside from Saint Anargyros, which was built in the late 14th century, the other churches were built in the 16th and the 17th centuries.

The Armenistis lighthouse was built in 1891, as a result of the sinking of British steamship Volta in 1887, off the north coast of the island. To avoid the recurring of this type of tragedy, the 19-meter lighthouse was built to stand as a guide for incoming ships. Its elevated position above the Aegean sea offers beautiful views, which are particularly spectacular at sunset.

The lighthouse is located close to Agios Stefanos village and can be accessed via a private transfer or by renting a car. There are several tours which will give you a guided tour and more detailed information on the history of the lighthouse. 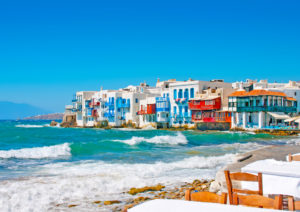 If you are after some romantic moments in Mykonos, look no further than Little Venice, one of the most picturesque settings on the island. Rows of medieval two and three-storey houses line the waterfront with their wooden balconies hanging over the sea.

Once the properties of local rich merchants or captains, these houses feature little basement doors which provided direct access to the sea and underground storage areas, leading many to assume that their owners might have been pirates. Nowadays, most of the houses operate as bars, cafes, shops and art galleries.

Located on the hill above the port of Mykonos, the Archaeological Museum of Mykonos is one of the oldest museums in Greece. It was originally built in the early years of the 20th century to house the excavations from the island of Rineia, including sculptures and tombs.

It now has six rooms containing other finds from important excavations in Mykonos history. The collection includes marble and clay sculptures, vases, jewellery and ceramics. However, its most famous item is a vase with the image of a Trojan horse, dating back to the 7th century BC and discovered in Mykonos in 1961. The museum is located in Mykonos Town, just a 3-minute walk from the Old Port bus station.

The best places to watch the sunset in Mykonos July 30, 2020

Our guide to the best day trips from Mykonos April 6, 2020

5 reasons why you should have a Mykonos wedding April 6, 2020

Our top Mykonos travel tips to help you plan your visit April 6, 2020